For this project, my team is making a comedic scene. The idea is to keep the audience in suspense regarding the mystery item Kirsten is holding until the very end, when the comedic relief comes in. We all discussed the building of the group storyboard, after comparing our own personal ones. 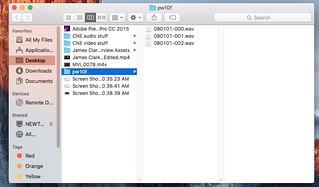 We primarily discussed how we would record dialogue based on where the camera would be positioned during wide shots. We decided that for post production we would do voice over if necessary, along with sound effects (munching + crumpling bag)

My sound design influence is Ai-Ling Lee. He is extremely good at his craft. For example, he was nominated for his work in La La Land at the 89th Academy Awards. He also designed sound for Deadpool, The Maze Runner, and Bruce Almighty.

What I Learned and Problems I Solved

I discovered the names of sound designers who have worked on films I’ve enjoyed watching. I also learned how to efficiently plot out my role for production, and prepare for the actual filming.